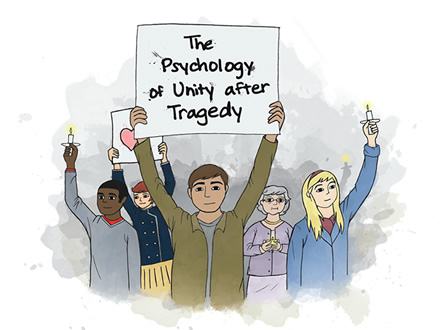 The Psychology of Unity after Tragedy

Oklahoma City. Boston. Sandy Hook. Aurora. These tragedies cost many lives. In the aftermath of such devastating events, news services provide a glut of images and social media outlets overflow with negative posts, all focused on the shock and horror. Yet, through it all, a positive counterpoint emerges—the nation pulls together.

The sea of American flags flying after 9/11, the teams mobilizing to assist after Hurricane Katrina, and the heroism of bystanders at the Boston Marathon support the same conclusion: during and after a tragedy, Americans and those who call the U.S. home display remarkable altruism, compassion, and community spirit. According to APU's graduate psychology faculty, this propensity toward increased unity and kindness in the face of tragic events has its basis in social psychology and sheds light on several important, encouraging aspects of human nature.

“First, we must ask why people want to help in general,” said professor and clinical psychologist Joy Bustrum, Psy.D. “A debate in psychological literature questions whether humans help each other out of genuine empathy or mere self-interest—seeing someone in pain makes us feel bad, therefore, we help in order to relieve our negative feelings.”

She points to a 1990 study that tested this argument with heartening results. The study theorized that if people helped only out of self-interest, they would not provide assistance if they had an easy out. One group was told it would witness test subjects receiving electric shocks over and over, and another only once. To the researchers’ surprise, people in the latter group still intervened on behalf of the test subject, even though the test’s short duration would enable them to soon escape their bad feelings without attempting to alleviate the situation. “This confirmed that help arises from compassion and care, not just concern for our own comfort—that empathy is core to our makeup,” said Bustrum.

Samuel Girguis, Psy.D., director of APU’s Doctor of Psychology in Clinical Psychology program, asserts that altruism partially motivated by self-interest may not be as bad as it sounds. “It’s not necessarily an I-scratch-your-back-you-scratch-mine dynamic, or even just relieving negative emotions. Rather, it can be positive self-interest. People who volunteer or give money to charity actually report greater life satisfaction.” He cites functional MRI studies revealing that the action of making charitable donations triggers the parts of the brain associated with pleasure and reward. “It is clear that humans are built with a natural physical incentive for altruism,” said Girguis.

In the case of national tragedies, both professors explained that the motivation for altruism becomes even more pronounced due to what social psychologists call the “in-group/out-group” mechanism. “Social identity theory states that we organize ourselves into groups as a vital part of our self-esteem,” said Bustrum. “We define ourselves and sort a world full of overwhelming stimuli by deciding which people are like us (in-groups) and which people are not like us (out-groups). Then, to increase our self-image, we strive to enhance the status of our in-groups.”

Thus, the effect a tragedy has on an individual’s emotions depends largely upon how much that person identifies with the victims. “If a tragedy strikes our in-group, we feel it more deeply. It also causes a crisis, because it calls the meaningfulness of our own existence into question,” said Bustrum. “We retreat deeper into meaningful groups in order to strengthen our social identity.”

Marjorie Graham-Howard, Ph.D., chair of the Department of Graduate Psychology, points out that tragedies can expand our perceived in-groups in a beneficial way. “When bad things happen, the community pulls in closer. Differences that would normally cause division become less important,” she said. “If your house is floating away, no one cares who you voted for.” She points to multiple research studies that have observed a reduction in problems related to racism, community discord, and gang affiliation when community members focus on a common problem or task. “Tragic events cause these existential issues to supersede the ways that people may be divided, resulting in a larger in-group.”

Girguis believes that this larger in-group represents a move toward God’s intent for humanity. “These group dynamics aren’t new—the Old Testament hinged on in-groups and out-groups. The Hebrews were the people of God and others weren’t. Jesus’ teaching challenged and changed that belief—He chose the tax collector, the Samaritan, and the leper. He said, ‘Who are the outcasts and the strangers among us? Those are the people I am going to identify with.’ Over and over again, He implied that there is no out-group.”

Girguis emphasized that the nature of in-and out-groups, and whether they become a positive force, comes down to personal choice. “Both the theological and psychological understanding of these horrific events and the acts of malevolence and heroism that run through them, is that humanity has the capacity for great good and great evil,” he said. “We have a choice in what we do, whether it increases evil or good. We also have a choice in how we define our in-and out-groups, and what we do about them—whether we use them as an excuse for racism or hatred, or an opportunity to follow God’s leading.”

This psychological good versus evil tug-of-war may also explain why images of heroism and positive outcomes from tragedies resonate in American culture. “It’s hard for us to hold two conflicting beliefs in our minds at the same time,” said Girguis. “The contrast between humanity’s good and evil causes cognitive dissonance. It’s hard for us to believe that the kid who shot up a movie theater in Aurora, Colorado, also had potential for good, that he could have gone on to do great things.” As a result, in the face of tragedy, we actively seek to remind ourselves and each other that this evil does not represent us individually or as a group. “We focus on our potential for good, we hold up examples of what it means to be a citizen and a good person, and we volunteer, donate, or help somehow.”

According to Scott Bledsoe, Psy.D., assistant professor of graduate psychology, the support that group members provide each other after tragic events, known by psychologists as social solidarity, provides marked benefits. “The community spirit we experience during and after a tragic event serves a functional purpose, both relationally and psychologically. It protects us and helps rebuild more quickly our sense of camaraderie and fellowship with others.” He described a 2012 study showing that people who express high levels of social solidarity after tragedies display fewer symptoms of depression and higher levels of both short- and long-term well-being.

This research also supports that anyone affected by a tragedy, whether directly or indirectly, should participate fully in the natural inclination to help, reach out to others, and invest in positive, meaningful group membership. “These tragedies are horrible,” said Girguis. “But once they occur, we are presented with a choice. If we act on the inclination toward altruism that God has built into our psyches, we can advance the cause of good in the world.”

Originally published in the Fall '13 issue of APU Life. Download the PDF or view all issues.