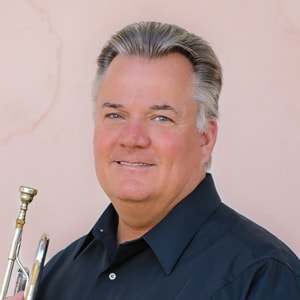 David Washburn, M.M., is a Yamaha Performing Artist and the principal trumpet of the Los Angeles Chamber Orchestra. A much-sought-after musician in Los Angeles, he also holds the position of associate principal trumpet of the L.A. Opera Orchestra and has served as principal trumpet and soloist with the Hong Kong Philharmonic Orchestra. Active in recording studios, Washburn has numerous motion picture soundtracks to his credit. He played principal trumpet for Rogue One, American Pickle, Spiderman Far From Home, Incredibles 2, Coco, A Quiet Place, Spiderman Homecoming, War for the Planet of the Apes, xXx The Return of Xander Cage, 10 Cloverfield Lane, Independence Day – Resurgence, Godzilla, The Amazing Spiderman, Karate Kid, Avatar, The Legend of Zorro, Troy, A Beautiful Mind, Windtalkers, The Perfect Storm, Titanic and Deep Impact. He has also been a part of the John Williams Trumpet Section for over 20 years including Star Wars ,The Force Awakens, The Last Jedi and The Rise of Skywalker.

He received his Masters of Music, with distinction, from the New England Conservatory of Music in Boston and his Bachelor of Music from the Thornton Music School at the University of Southern California. His trumpet instructors have included Rob Roy McGregor, Robert Nagel, John Clyman and Joan LaRue.David has been a featured soloist with many different orchestras including the Los Angeles, St. Louis, Knox Galesburg, Hong Kong and California philharmonics; the Los Angeles, San Diego and South Bay chamber orchestras; the Berkeley, Burbank and Glendale symphonies; the New York String, University of California Irvine and Pasadena Pops orchestras and the New York Chamber Music Society at Lincoln Center, as well as at the Santa Fe, La Jolla, Music@Menlo chamber music Festivals and Bear’sPremiere Music Festival in Hong Kong..

When he is not performing, his favorite pastime is boating with his children, Timothy, Samantha, Nicholas, and Julia.