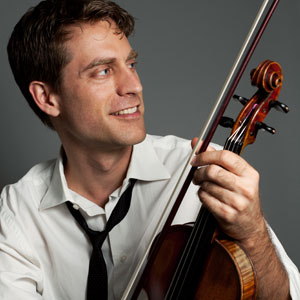 Alex Russell began studying the violin in San Diego, California, at the age of two. He first performed on national television at the age of 11, and at 15 years old won his first professional orchestral position. During his career he has been a member of orchestras throughout California and Ohio and has worked with such conductors as James Levine, John Williams, Michael Tilson Thomas, Sir Neville Marriner, James Conlon, Carl St. Clair, Sergiu Comissiona, Luis Lane, and Rafael Frühbeck de Burgos.

An avid performer of both chamber and solo music, Russell has given chamber music recitals in a dozen countries across four continents and has a performed with orchestras in Sweden, Lithuania, Ukraine, Armenia, South Korea, Canada, and throughout the U.S. He has performed on numerous occasions on local, national, and international radio and television broadcasts, and, as a recording artist, he has produced six full-length albums, selling over fifteen thousand copies to date. He is very committed to teaching: he is Assistant Professor and Director of String Studies at the College of Music and the Arts at Azusa Pacific University and has given masterclasses around the world at music schools and conservatories, including Komitas State Conservatory in Yerevan, Armenia, and the P. Maiboroda Music School in Zaporozhye, Ukraine.

Russell has received fellowships to study at a number of music festivals, including the Tanglewood Music Festival and the Aspen Music Festival. He holds a Master's in Violin Performance from the Cleveland Institute of Music, where he studied with Paul Kantor. He has completed his DMA in Violin Performance with Alice Schoenfeld at the University of Southern California. Russell performs on an 1865 Auguste Sebastien Philippe Bernardel violin.