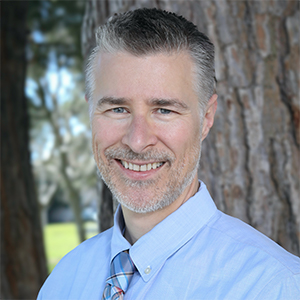 In 2002, Brad Hale, Ph.D., came from the east coast to join the faculty of APU’s College of Liberal Arts and Sciences to teach modern European and African history for APU’s History and Political Science Department. He also teaches for the Humanities Program and serves as a Fellow in the Honors College. He believes that the liberal arts are foundational to Christian higher learning, empowering students to fulfill Paul’s encouragement to meditate on the honorable, the just, the pure, the lovely, the commendable, the excellent, and the praiseworthy (Philippians 4:8). He hopes that through the study of history and the humanities students will come to a rich understanding of how they can glorify God with their whole lives.

In addition to his teaching, Dr. Hale is currently working on a book on the lives and ministry of French missionaries in Algeria. The study examines the complex relationship of missionaries to imperial authority, the tensions between Christian theology and colonial culture, and the interaction between Christians and Muslims in a secularizing world. This research interest originated in Hale’s college years. Upon his return from a semester in Paris, France, which also afforded him the opportunity to travel to North Africa, one of his professors enlisted him for a research project on French colonialism in Algeria. The experiences of traveling in France and North Africa and of working alongside his professor convinced him to pursue graduate work in European and African history with a focus on French Algeria.

While his main research interest concerns French Algeria and Christian missions, over the past few years Hale has also developed a fascination with the global events of 1968, from Paris to Prague to the Planet of the Apes. He has presented papers about 1968 at conferences and teaches a course on that remarkably eventful year.

Dr. Hale is part of a team at APU that has received a grant from the National Endowment for the Humanities to introduce new college students to the humanities. In particular, he will teach summer Humanities classes on the Declaration of Independence as the nation anticipates the 250th anniversary of its founding.