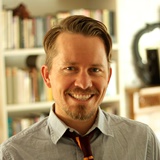 Caleb D. Spencer works at the intersections of literature, literary theory, cultural studies, and theology, focusing his research upon late Modernism through the contemporary. He has taught broadly in literary studies (British and American, as well as European literature in translation), literary theory, anglophone and world literature, and critical theory. He has published critical essays in the Journal of the Religion and Popular Culture and Christianity and Literature. He is very interested in modernist poetry, especially the English and American poet W.H. Auden.

Spencer has published art criticism on contemporary sculpture and photography, in addition to having taught at the School of the Art Institute of Chicago for 10 years. He is currently finishing a book project entitled Protestant Postmodernism: Theory and Theology, Affect and Art, which demonstrates various structural resonances between modernism in theology and postmodernism in art, literature, and popular culture, most centrally in the emphasis upon experience in all three. His current book project, tentatively titled The Better Story: Memory, Aesthetics, Truth, looks at the problems of memory in contemporary fiction, memoirs and film, especially as it relates to fiction (and the fictionalizing of memoir) and the problem of truth. Spencer is a Harvey Fellow.