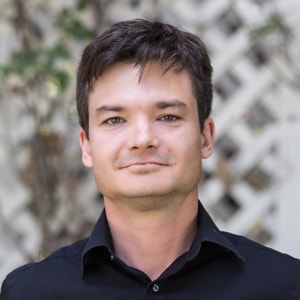 Sándor Volkán-Kacsó is an associate professor in the Department of Mathematics, Physics, and Statistics. He received his undergraduate training in physics at a leading university in Romania, in the western province of Transylvania. As an undergraduate, he published his first paper in atmospheric light refraction in the American Journal of Physics. Later, he moved to the US for graduate studies at the University of Notre Dame, where his research focused on the phenomenon of fluorescence intermittency ("blinking") in quantum dots and other nanoscale particles. His work on blinking was published in journals such as Physics Review Letters, Nano Letters and the Journal of Chemical Physics.

After receiving his Ph.D. in Physics, he moved to the California Institute of Technology, where he developed a theory that enabled him to predict, without the use of adjustable parameters, the experimentally measured rate constants of ATP binding and release as a function of rotation angle.

His current research interests are in the broader area of single-molecule biophysics with a focus on molecular level studies of various motor enzymes including myosin V, DNA-motor complexes and problems related to the cellular mechano biology of cancer. Dr. Volkán-Kacsó is enthusiastic about teaching physics of all flavors and performing cutting-edge research with students.

By appointment only. Tuesday and Thursday 11:00 AM - 12:30 PM. Contact professor for appointment link.