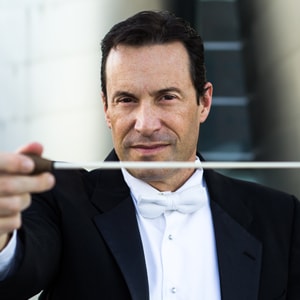 Christopher Russell, MM, is conductor of the APU Symphony Orchestra and leads their graduate instrumental conducting program. The Los Angeles Times called him “a forcefully dramatic conductor with a strong technique”. The Herald Times said Russell's performance "both tamed and enticed the orchestra to create a texture at once controlled and impassioned".

Guest conducting appearances include the MasterWorks Festival in Ohio and Indiana, the Orquestra Sinfônica Heliópolis in São Paulo, Brazil, the International Orchestra Festival and the Yellow River Symphony in Zhengzhou, China, the Harbin Symphony, and the Shenzhen City Philharmonic. He has also conducted at Carnegie Hall, the Sydney Opera House, and prestigious concert halls in London, Vienna, Prague, Moscow, and Saint Petersburg. Russell was on the jury for the final round of the 4th and 5th Hong Kong International Music Festival.

As a music lecturer, he is a regular pre-concert speaker for the Los Angeles Philharmonic. He has also presented lectures for the Philharmonic Society of Orange County and the Pacific Symphony. Internationally, he presented lectures at the openings of two new theaters in China: the Florence Culture and Arts Exchange Center in Dalian and the Sound of the Phoenix Theater in Qingdao. For the LA Phil, he has interviewed many famous classical artists including Gustavo Dudamel, Esa-Pekka Salonen, Jaap van Zweden, Emanuel Ax, Leila Josefowicz, and John Adams.

Russell’s musical interest also extends to performing rarely-heard older music including the U.S. or California premieres of many works from the early and mid-20th century including music by Havergal Brian, Rued Langgaard, Bohuslav Martinu, and Allan Pettersson. An advocate for conducting American music abroad, he conducted the Australian and Brazilian premieres of Ives’ 2nd Symphony and the Russian premiere of Peter Mennin’s Symphony No. 5. Russell conducted the world premiere of the Symphony in A composed in 1878 by Leopold Damrosch with the APU Symphony. They recorded an all-Damrosch disc which was internationally released on the British record label Toccata Classics.

For over 20 years until 2019, he conducted the Orange County School of the Arts Symphony Orchestra where he regularly received accolades for the orchestra’s quality and adventurous programming. The American Society of Composers, Authors, and Publishers has awarded him their prestigious Award for Programming of Contemporary Music for youth orchestras on ten occasions. Seven of those times, he was awarded first place in the United States.