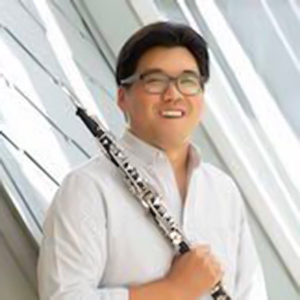 A member of the Pacific Symphony since 2014, Ted Sugata is an active chamber musician, orchestral musician and educator. Previously, he was a member of the Sarasota Orchestra in Florida, and principal oboist with the Lyrique-en-Mer Opera Festival in Belle-Ile, France.

Ted was raised in Northridge, California in a family that fostered music. His earliest musical memory was falling asleep to the glorious sounds of Antonio Vivaldi’s “Four Seasons”. After several years on the piano and cello, he decided to become an oboist in middle school. In high school he received the ASCAP Leiber and Stoller music scholarship and was a semifinalist of the Los Angeles Music Center’s Spotlight Awards Competition. He continued his oboe studies at the Manhattan School of Music and Cleveland Institute of Music under Joseph Robinson and John Mack.

In 2014, Dr. Sugata received a doctorate of musical arts from USC under Joel Timm. He currently serves on the faculties of Chapman University, Azusa Pacific University, the Colburn Community School of Performing Arts, and the Idyllwild Arts Summer Program. His students have gone on to careers in music and have been accepted into the Juilliard School, Cleveland Institute of Music, New England Conservatory, Rice University, Indiana University, Oberlin Conservatory and USC.